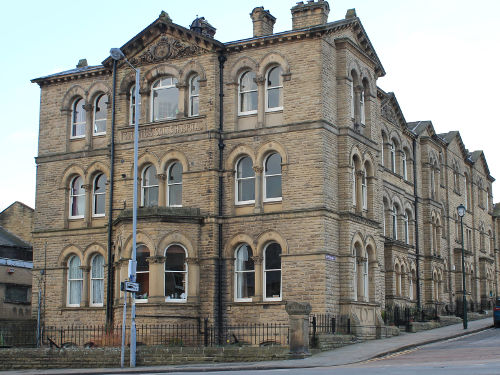 During the Great War, Sir Titus Salt’s Hospital operated as an Auxiliary War Hospital receiving soldiers for convalescence who had been wounded in action. Whilst the hospital received funds to meet associated medical costs there were no monies for the soldiers’ non-medical needs. Under the auspices of the Sir Titus Salt’s Hospital Board a Ladies’ Committee for Soldiers’ Comforts was set up specifically to raise funds through subscriptions, donations and organised events and to agree how the monies raised, known as the Comfort Fund, should be spent.

The Sir Titus Salt’s Hospital Board met monthly and its proceedings were reported on regularly in The Shipley Times and Express. On the 27 September 1916, the paper reported that at the December Board meeting there had been heated debate about the “unauthorised” purchase of rum.

Therefore, the Matron, Hannah Mitchell, on receiving a gift of £2 from the Committee “to spend as she thought fit” purchased a bottle of rum being unaware of the discussions that had taken place at the Ladies’ Committee.

“Well it is the usual thing” said Mr B Allsop (Chairman).

Councillor Learoyd a Board member stressed it was a “matter of principle” and if the Ladies’ Committee had agreed not to supply rum, the officials of the hospital had no right to over-ride that decision.

“But you would not spoil the Christmas dinner, would you?”. (Mr Baumann, Board member)

Councillor Learoyd replied that it made no difference to the principle involved whether the puddings were spoiled or not. When members of a committee had spent time voluntarily in considering a question, their decision ought to be respected. When it was argued that doubtless the Matron had thought that the committee had probably overlooked the matter of the rum –

Councillor Learoyd retorted:  “She is not paid for thinking in that way. She is paid for doing as she is told”.

There were tense exchanges, Councillor Learoyd threatened to resign and challenged the Board to move a vote to censure the Ladies’ Committee. In the event, however, it was agreed to invite the Matron to “discuss the question”. There is no report on the substance of this discussion.

Subsequently editorials appeared in the press, stating that the discussions at the Board arose from a misunderstanding, together with a letter from the Chair of the Board exonerating the Matron.

But the matter would not go away and numerous letters appeared in the local press throughout January 1917 under the headings, to cite a view: Absolute Piffle; A “Saucy” Enemy; The Limit of Flapdoodle; Tommy and his Rum; A “Rum” Answer to a “Rum” Question.

At the time there was a national debate raging about whether the practice of soldiers receiving daily rations of rum was a harmless comfort or in fact adversely affected their ability to operate effectively. The question of rum for the plum pudding at the hospital therefore provided a platform for local people to vent their strong feelings about this issue.

On 12 January 1917, The Shipley Times and Express published a letter it had received from the Shipley Tent of the Independent Order of Rechabites, enclosing a copy of a resolution which had been unanimously adopted:

That, we, the members of the Shipley Tent I.O.R, protest against the use of intoxicants at Saltaire Infirmary, either as beverages or in connection with food stuffs, as their use is at all times fraught with danger to whoever partakes of them. And especially at this period, when wounded soldiers are among the inmates of that institution. It is advisable that temptation should not be put in the way, and that, too, in contradiction to the wishes of the sub-committee of the Board of Governors.

…I see the war on rum still continues …. There has been a slight attack from the direction of Shipley by “some” order, who has not had “Somme”…

The issue was taken up most vocally in the local press by Mr Thomas B Knox who, citing the late Lord Kitchener, argued that not only should soldiers avoid alcohol at all times but also that it was illegal for any vendor of intoxicants to supply soldiers in army uniform.

All honour to the Ladies’ Committee for their effort to combat what the present Premier recently characterised as an enemy of the nation, when he said that we are fighting Germany, Austria and the drink traffic.

This was rebutted by others.

To common sense people …Mr Thomas B Knox strikes one as making mountains out of molehills and the mountains are poor stuff….What its “pernicious effects” are, or what “danger it is fraught with” at a teaspoonful per man is about the limit of exaggerated flapdoodle.

In my opinion it is “piffle” to make so much fuss over a paltry thing like this … I think our Matron is quite capable of looking after us, and to a man we stick to her as we stuck to the guns at the front

At the Hospital Board meeting at the end of January the question of the purchase of rum was again raised. The Chair requested that such discussions be held after the Press had withdrawn but Miss Dunn interposed that before the Press withdrew, she wanted it publicly known that she intended to tender her resignation as a member of the Committee.

It was subsequently explained by Mrs Rhodes, who had not been at the previous Board meeting, that the Ladies’ Committee decided not to buy rum because they were concerned that some subscribers to the Comfort Fund may not have approved. It was further argued that those who were responsible for establishing the hospital (i.e. Sir Titus Salt) did everything possible to keep intoxicants out, not only of the hospital but also of the local area. It was noted that the Board itself had tried to follow this lead, with the exception of brandy which, it was explained, was permissible for medicinal purposes.

“There is an account here for 8s for brandy. It is only a single bottle”. (Mr Cryer, Board member)

With that the matter was concluded!

The Chair stated that he was “only sorry things had been magnified in the way they had; it was a great misfortune”. The Board agreed to ask Miss Dunn to reconsider her decision which she did and withdrew her resignation.

Words by our volunteer writer, Caroline Perry. Based on research by local historian Colin Coates.

In an online talk for the Victorian Society, Sheila Binns…

Sir Titus Salt’s Hospital was opened in September 1868 and…

Recent Posts
Sign up for our newsletter
Enter your email address and we'll add you to our mailing list. You can unsubcribe at any time.
Follow Us
Follow us on social media to stay on track with the latest news.
© Copyright The Saltaire Collection - All Rights Reserved 2022 Website by PMD Creative Solutions Ltd
Back To Top
This site uses cookies: Find out more.