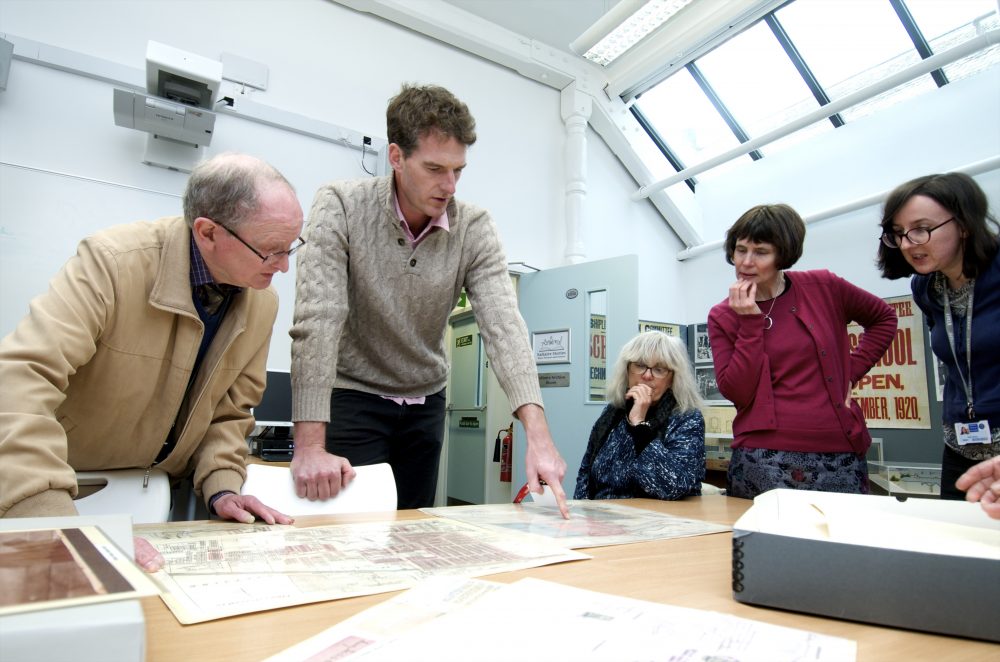 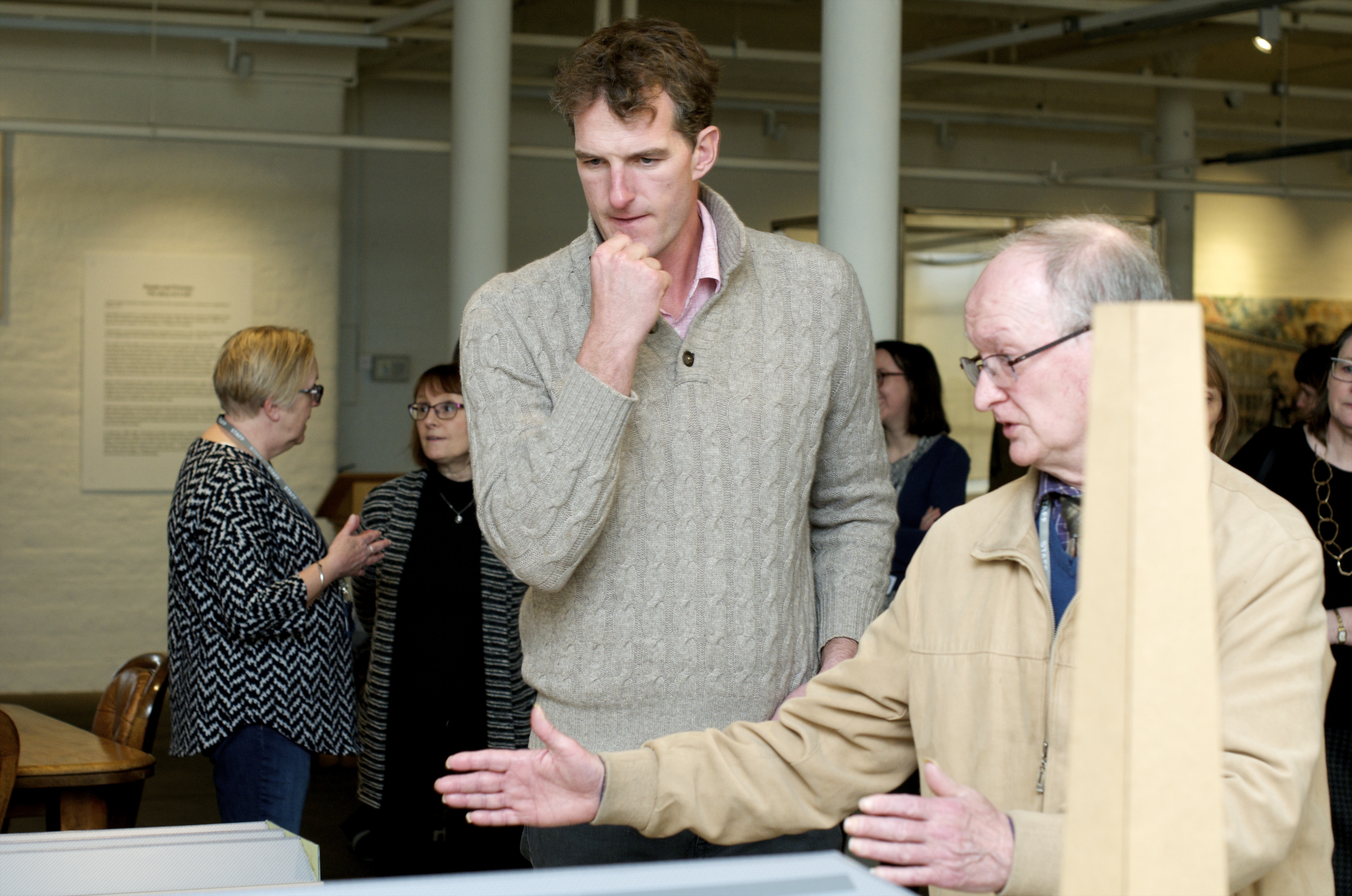 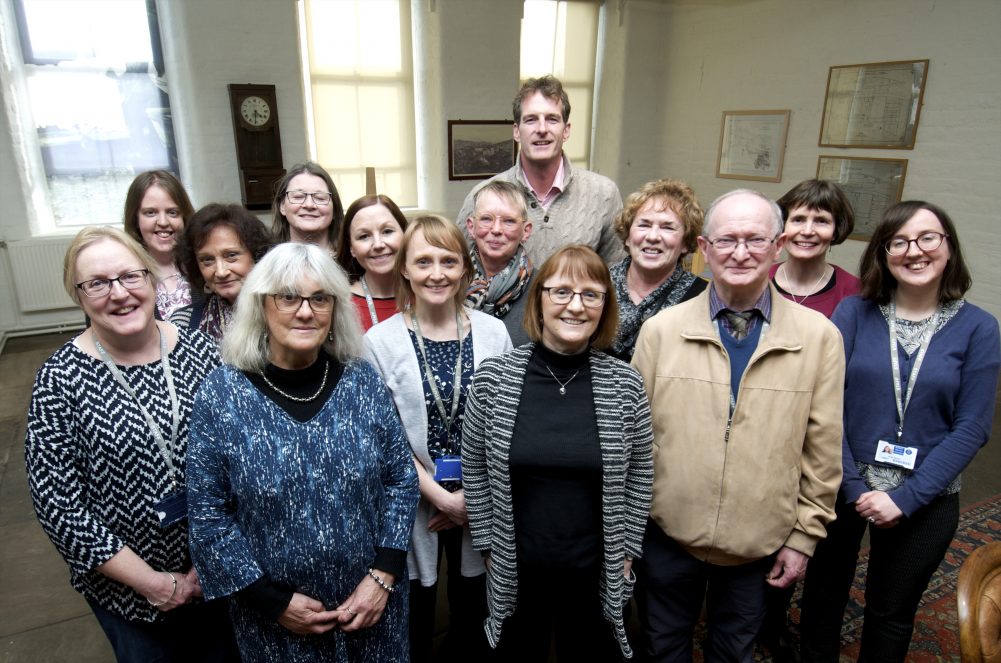 When a Saltaire Collection volunteer heard that the well-known TV historian Dan Snow was coming to Yorkshire she felt inspired to tweet him an invitation to view the historical treasures of Saltaire. He had mentioned on Twitter that he had visited a world heritage site, and she thought it would be a great opportunity to introduce him to Saltaire, to her delight his response was positive.

This led to a visit, much enjoyed by the staff and volunteers of the collection who welcomed him to Saltaire on Monday afternoon. Dan was a courteous and enthusiastic guest, who had many questions about the village and its history, took many photographs and posted extensively on social media afterwards, commenting on Twitter, “One of Britain’s greatest historic sites: Saltaire. The utopian Victorian factory and village which provided workers with houses, jobs, healthcare, education and pensions. Revolutionary”

Dan met with Zoe Silver from Salts Mill in the UNESCO World Heritage village and with Sheena Campbell, Saltaire’s World Heritage Officer. He then visited the People and Process exhibition where he was introduced to staff and volunteers from the Saltaire Collection and shown the archives items on display there. These include some of the Salt family china, various 1887 Royal Jubilee Exhibition souvenirs and textile sample pattern books. Many more documents and objects can be found in the archive

Feeling blessed that the weather, although cold, was no longer wet, volunteers then took him on a flying tour of the famous industrial village, built by Sir Titus Salt in the mid nineteenth century. There was time for a brief visit to the archive, housed in Shipley College’s Exhibition Road site, before we had to bid him farewell as he had to make his way to Ilkley for his evening performance.  Dan showed interest in all we had to show him and spoke to volunteers about their role in preserving the history of this world ranking industrial village and documenting the lives of the people who lived and worked here.

At the end of his visit he told us, “What strikes me about Saltaire is that it is unique both in the ambition of its founder for a work and welfare community and also in the fact that there is just as much ambition in the present in maintaining this community.” After speaking of the aesthetic harmony and “good living” to be found in the village, he concluded that it had, “remained true to its principles, not just in the heritage fabric but in the ethos. It is an extraordinary and inspiring place”

Ian Watson, a volunteer for many years at the Saltaire Collection, who was born in the village, said, “It was a great pleasure to meet Dan and to show him some of the highlights of our collection.  We are very proud of what we have achieved and hope to welcome many more visitors from around the world, both in person and through our website, and share our history with them”.

The visit, although something of a whirlwind tour, was a wonderful chance to share some of our history with one of television’s most popular history presenters. We hope that Dan will return for a more detailed visit, and possibly even make a documentary about the history of our small but lovely and historically important village.  Dan Snow is well known for his slot on the One Show and for his documentaries, many on military subjects. He is currently undertaking a countrywide History Hit tour, one of the venues of which is the King’s Hall in Ilkley.

COVID-19 and the Collection

Events are moving fast and you will not be surprised…

We are excited to announce a new acquisition, a plush…

On April 1st the Collection is launching a new fundraising…

Complete your email address and we'll add you to our mailing list. You can unsubcribe at any time.
Follow Us
Follow us on social media to stay on track with the latest news.
© Copyright The Saltaire Collection - All Rights Reserved 2020 Website by PMD Creative Solutions Ltd
Back To Top
×
This site uses cookies: Find out more.