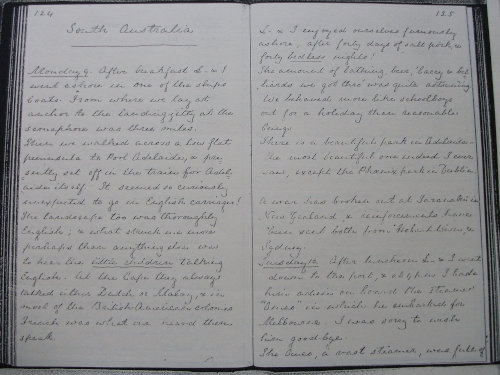 One of our volunteers has spent many a happy lockdown hour transcribing a fascinating journal we have in the Collection. It describes in great detail a voyage from Liverpool to New Zealand in 1859/60. The writer tells us of his fellow passengers, the ships, the places en route (Madeira, St Helena, S Africa, Australia), the flora and fauna, the storms etc, all written in beautiful handwriting and an engaging style. Unfortunately we don’t know for sure who wrote it, exactly how it ended up in the Collection and what (if any) the connection is with Saltaire!

We think the writer was Marmaduke Alexander Lawson, related to the Lawsons of Boroughbridge mentioned in Burke’s Peerage, who travelled to the “colonies” as a young man and who later became a Professor of Botany at Oxford University – but we cannot be 100% sure. Further detective work is needed to try and find the connection with Saltaire. Can you help? Or perhaps you know who might have donated it to us?

A few extracts to give a flavour of the entries:

The clang of hammers – the coming-alongside of tenders with stores – the getting all in readiness for sea, completely banished that “calm repose” so usual & so delightful on the day of rest.

About noon – in great haze & heat – we saw at some miles’ distance a rakish-looking schooner, which, had our ship been a man-of-war, we should have overhauled. She was probably a slaver. But it is unlawful for an English ship, not having the treaties on board, to chase or capture a slaver.

The great mountains looked glorious in the setting sun. I myself was in grateful shade, going under oaks & between vineyards, past orange & mandarin-orange trees, & near rustling bamboos & canes. I have walked in lanes made shady by peach & medlar trees.

In the afternoon Capt: Wynyard & I went to the Botanical gardens which are in the Park. I saw live emeus (sic) & kangaroos, & the strangest beast in the world – called woombat (sic) (or some such outlandish name). He looked like a cross between a pig & a bear. His legs were excessively short, & his head was exceedingly big.

It was not possible either to walk, to stand, to sit, or to lie, without holding on by both hands. The roar of the waves, & the howling of the storm thro’ the shrouds, was awful & deafening, & the ship, being hove-to in so bad a sea, strained so shockingly that it was expected she would open a plank.

For my dinner I ate – a great wickedness! – albatross of which as food, the very worst that can be said, is that it tastes like good beef off a fishy plate.

In late October we were excited to host a visit…

Recent Posts
Sign up for our newsletter
Enter your email address and we'll add you to our mailing list. You can unsubcribe at any time.
Follow Us
Follow us on social media to stay on track with the latest news.
© Copyright The Saltaire Collection - All Rights Reserved 2023 Website by PMD Creative Solutions Ltd
Back To Top
This site uses cookies: Find out more.