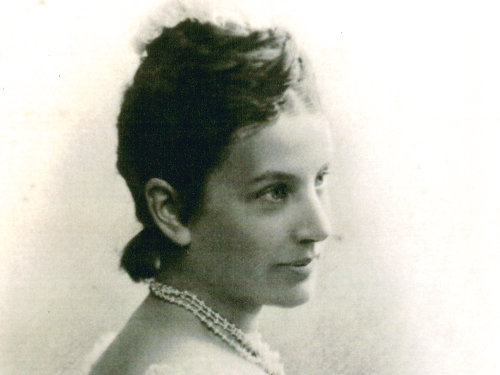 Catherine was born in 1846 into the Crossley family of Halifax, her father, Jospeh, being one of the trio of brothers who ran the world famous carpet manufacturing firm.  She was the oldest surviving daughter in a family of six sons and three daughters who reached adulthood.  Her family finally lived in Broomfield in Halifax, a large property standing in twenty acres of grounds.  No record has been found of her education, but it was probably conducted by a governess at home.

The Crossleys were close friends of the Salt family headed by Titus Salt, who built the world famous village of Saltaire.  Both families were predominantly members of the Congregational Church and the Liberal party.  Between 1843 and 1859, and again from 1866 to 1877 the Salt family lived at Crow Nest in Lightcliffe, which is near Halifax.  Catherine married Titus, the youngest son of Titus (later Sir Titus) Salt in 1866.  They set up house in Baildon, and in 1871 moved into the large new mansion of Milner Field, built by Thomas Harris for Titus, jnr.  Over the course of the marriage three sons, Gordon, 1866, Harold, 1868, and Lawrence, 1874, were born, and a daughter, Isabel, 1876.

Catherine was not involved in constant child-bearing, as her mother had been, and was able to take part in activities both social and charitable.  She and Titus socialised with their neighbours, many of whom were mill owners in a similar position to themselves.  The local press reports Catherine as singing at various soirees.

She appears to have overseen the household herself and to have been a thrifty housekeeper.  However, when the Prince and Princess of Wales visited them for two nights in 1882, no expense was spared in the entertainment.  Similarly when Princess Beatrice, youngest daughter of Queen Victoria, visited them with her husband in 1887, there was lavish spending.

Not only was she a gifted singer and accomplished hostess, but she was very seriously involved with improving secondary education for girls, and was instrumental in the foundation of Bradford Girls’ Grammar School in 1875.  She was also a member of their Board of governors throughout her life, and was also on the board of the Salt Schools in Saltaire, founded by Sir Titus Salt.

After her husband died in 1887, at the age of forty four, Catherine continued to live at Milner Field.  She continued their tradition of giving dinner parties for the local manufacturers and their wives, many of whom she counted as friends.  She included figures from the local university of Leeds, and others from the professions.   She also hosted a lively fancy dress ball for her daughter’s coming-out party in 1895.

From the early 1890s the mill at Saltaire was experiencing financial difficulty and after 1893 the mill was no longer in the hands of the Salt family.  One of the four business men who took over was James Roberts, a wool merchant of Bradford.  It was to him that Catherine sold Milner Field in 1903, when she moved to Ben Rhydding, near Ilkley, to take up the tenancy of Denton Hall.  She lived there for eight years, taking part in the social life of Ilkley, and seeing her daughter, Isabel, who lived with her taking an increasing part in the social and political life of the town.

In 1911 she moved again to the Old Rectory at Thorp Arch near Boston Spa, which first she rented, but was later bought by the family.

Her last move was to Harrogate, where she died in 1930 aged eighty four.

There is no separate collection of Catherine’s papers, etc.  in the collection, but her documents are included in the gifts which various members of the Salt family have made to the Archive.  These include: a journey to Italy with Titus and her sister, Margaret, in 1868; her day book; a record of her dinner parties, and her bank account.