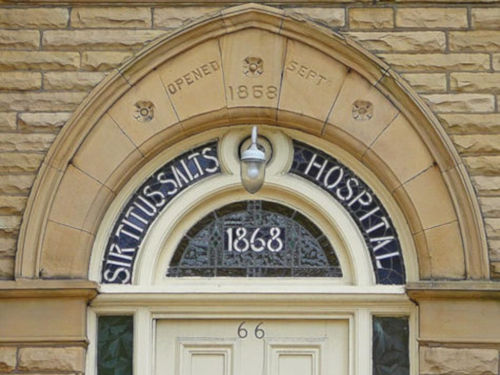 Hannah Mitchell was born in 1868, coincidentally, the year the new hospital in Saltaire was opened.

The 1871 census shows the family, comprising of her father Francis, mother Lydia (nee Laycock) and baby brother Walter,  living at 67 Carr Topp, North Brierley, Wibsey. Her father was a woolsorter in a local mill. Francis was born in Bradford and a Catholic by religion.  Hannah was a practicing Catholic all her life.

In 1879 her mother died. Her father remarried and the 1881 census shows the extended family still living at Carr Top. By now her father and  stepmother, Maria (nee Langton), had had two further children, Herbert and Mary Emma. Hannah, at 13, is recorded as an unemployed worsted spinner.

The 1891 census finds Hannah at Kings College Hospital, London training to be a nurse. Despite their humble background Hannah and her siblings were obviously ambitious, not for them work in the mill. The 1891 census lists Walter as a blacksmith and Emma Jane as a pupil teacher. Emma Jane goes on to become an Elementary School Teacher and her step brother Herbert is listed in the 1901 census as an Inspector of Masonry.

On qualifying Hannah worked at the Bradford Royal Infirmary before taking up the post of Matron at the Sir Titus Salt’s Hospital (STSH) in Saltaire in 1899 at the age of 31. She remained there until her marriage to John Isaac Davison in 1918. John Davison was the Manager of Barclays Bank in Shipley.  He was active locally being Secretary of the Shipley and District Nursing Association but more significantly he was a Governor of the Sir Titus Salt’s Hospital and in all likelihood it is through this role that he met Hannah.

Hannah appears to have been an extremely competent, ambitious and progressive woman, a strong advocate of women’s rights. This is demonstrated by various articles and letters in the local newspaper, examples of which are given below.

Hannah was dedicated to the hospital but also active in the community. She was President of the local committee of the Catholic Women’s League, a non-political organisation whose object was to unite Catholics “in a bond of common fellowship for the promotion of social work and religious and intellectual interests”.  She was also chair of the local branch of the Catholic Needlework Guild.

In 1901, two years after her appointment, the Governors of the STSH increased her salary by £10 per annum and agreed an annual increase of £5 per annum up to a maximum of £60 (Shipley Times and Express 8 November 1901). In the minutes of the Governors’ meetings, which were regularly published in the local press, it is clear that they respected her opinion and often deferred to her wishes.

When there was a campaign to raise money for the hospital extension, and specifically a new operating theatre, Hannah organised sales of work which were held at The Institute and the Hospital. She organised sewing parties,  inviting ex-patients and local residents, adults and children, to come and help her make  “fancies” and small items which could be sold.

She had so many volunteers that it was hard to keep them all in work. As it was not thought appropriate at the time that boys should sew, they were asked to “save their pennies” and donate them to the hospital. At an event at The Institute it was said that “Miss Mitchell is very ambitious; she aimed high and her desire was to furnish an operating theatre by her own personal efforts”. It’s interesting to note that one of the justifications for the new operating theatre was that under the current arrangements, with no operating theatre, operations took place on the ward with other patients in situ. A less than satisfactory arrangement for doctors and patients (Shipley Times and Express, 29 April 1904).

In 1902 she wrote to the Editor of the Shipley Times and Express concerned that when accident cases were brought to the Hospital the casualties were often in great pain. She advocated that people should get first aid training so that appropriate relief could be given prior to arriving at the hospital. This suggestion was taken up by members of the St Johns Ambulance resulting in a series of 5 lectures in first aid and employers posting notices/boxes at work containing first aid information (Shipley Times and Express 9 and 23 May 1902)

Her interests were not just related to local issues. In 1913 a letter of hers regarding  the case of Ada Gertrude Missenden was published in the Shipley Times and Express. Ada was from a “good” family and had been the Head Night Nurse at the London County Council Asylum for 16 years, 7 of those on night duty.  The years on night duty had caused her extreme stress and she had resorted to alcohol and drugs and was eventually convicted of theft. In her letter Hannah accepted the gravity of the offences but argued that there had clearly been a dereliction in duty of care by her employers. She wrote

Her fault and her downfall are seen by thousands, the fault of the system by few ….. We don’t want mere pity for the fallen but we do want a different system of working

During the Great War the Sir Titus Salt’s Hospital was a War Hospital. Hannah was extremely popular with the convalescent soldiers. She was again active in encouraging people to donate mony to the Soldiers Comfort Fund and arranging entertainment and activities for the convalescents, at one time even facilitating the donation of a piano.

In a letter to the Shipley Times & Express (23 March 1917) she thanked the work people of Shipley for their help in providing extra comforts for the wounded soldiers. She wrote of one soldier, 20 years of age, who on leaving the hospital wrote to her to tell her he was going back to France “with a good heart to fight for you and the good people of Shipley – they are worth fighting for”. She said she subsequently heard from his mother that he had been killed in action. When  she left the hospital to be married she stated that she didn’t want any gifts but the soldiers clubbed together and bought her a case of silver afternoon spoons.

In 1921 due to John Davison’s poor health, Hannah and John moved to Grange-over-Sands. John died in 1934 and Hannah died two years later on 22 September 1936. Hannah left her house to her sister, Mary Emma Robinson, for her life and then to the Roman Catholic Bishop of Lancaster for the endowment fund of the Roman Catholic Church of St Charles. She left her pictures, books and household effects for the use of the Church’s Priest House, her Sheridan sideboard and mahogany tallboy to the Roman Catholic Bishop of Lancaster and amongst a number of small bequests £10 to the Sir Titus Salt’s Hospital, Saltaire (Shipley Times and Express 24 December 1936)

For more on the history of the Sir Titus Salt’s Hospital, and the associated alms houses, please see our historical timeline.