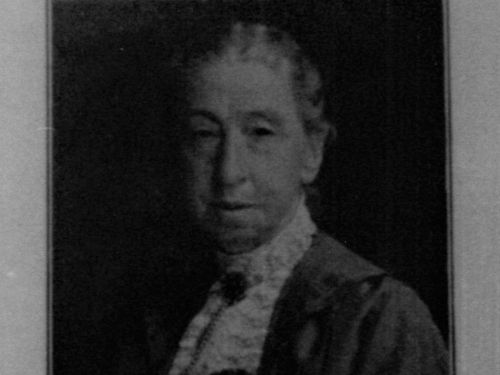 Little is known in the Saltaire Collection about Harriet’s early life. She came to work as a teacher at Salts Girls High School whilst Medina Griffiths was the headmistress and was appointed as her successor at the school in 1886. She wrote a long ‘Reminiscence’ about her years at the school and this was deposited with the Saltaire Collection. It is lovely to have her extensive written piece that explains what the school was like and her explanation of the impacts of the many changes to national education legislation over the period she was at the school.

Her memory of and admiration for Miss Medina Griffith

Harriet clearly admired Medina Griffiths and she strove to maintain the principles of education that Medina established. Harriet recorded in full an address given by Medina to parents and friends before a school entertainment. An extract from this address is below –

This evening’s entertainment is part of my scheme for girl’s education. I believe that lessons of patience, unselfishness, self-control and attention to detail can be learned through a well-directed play as thoroughly as from schoolwork. Opportunities are given for a clever use of knowledge and for the strengthening of imagination and taste. (a Play) can educate young girls to control undue shyness of strangers (which is) a valuable lesson in itself (Medina Griffiths)

Harriet also records some interesting features of school life for girls that were uncommon in the general approach to the education of girls at the time. The philosophy was that both work and play ‘honestly and heartily done’ was of equal importance. The aim was that each girl, as a result of their school training, was able to see that their liberty and that freedom could be won by the discipline of self-restraint.

The teachers in Salts Girls High were expected to be ‘opponents’ of marks, prizes and ordinary punishments’, based on a belief that ‘artificial punishments’ had the nature of ‘revenge’ and were not useful in encouraging good behaviour. Marks for schoolwork were only given for termly examinations and yet the school was outstanding for the success of its pupils. One pupil was the first girl in the senior ‘Cambridge List’ in mathematics, gaining the Lady Goldsmid prize, two others went forward to Newnham College, Cambridge and gained second class honours in mathematics and natural science triposes.

The distinction of the Salt Schools was recognised by many and several distinguished visitors from schools in London and Boards of Education visited to see the school practices for themselves and the Salt Schools attracted number of well-known people to be presidents of the schools.

Harriet was appointed headmistress for the Salts Girls High School in 1886 and during her early years in this position the school was not very large because it wasn’t a ‘board school’ where the local education board paid for the girls education and it wasn’t entitled to any grants or payments from central government. Harriet was able to obtain a some scholarship awards from the West Riding County Council to enable more girls from poorer backgrounds to enter the school and after the Education Act of 1902, County Major Scholarships became available for Arts as well as Science courses at any University and after a short time, the number of scholarships increased rapidly.

In 1906 a local pupil teacher centre was disbanded and its students were absorbed by Salts Girls high School. This increase in numbers and extension to the curriculum required the premises to be expanded. A second storey was added giving three additional classrooms, a laboratory and a domestic science room. The girls continued to flourish, and a considerable number graduated in honours, chiefly at Leeds University.

A great point was made of ensuring every girl had a part in regular school entertainments and these entertainments were not just for parents and friends but for past pupils. There was a strong spirit of comradeship between the girls and between the girls and the school mistresses. Providing liberty combined with trust and confidence in the girls made sure that all developed a high level of individual and corporate responsibility – lessons for all educators today perhaps.

Harriet felt that her best contribution to the girl’s welfare was to create an atmosphere in which both mistresses and girls could work together happily and well, and that this would result in all the girls developing their individuality along with acquiring a strong sense of social responsibility.

She supported the views of Dr. Thring, the headmaster of Uppingham (an important private school) who had said that ‘stars correlate night’ meaning that in schools pressing on the clever boys to win brilliant successes, the ‘rank and file’ were neglected. Despite a long and honourable roll of ‘old girls’ who had made their mark and filled high positions, Harriet’s approach was to ensure every girl achieved their full potential, whatever their future in life was to be.

A few of the successful girls

Other successful pupils included those who became a factory inspector; a tutor at Oxford University; a Librarian at the Chicago University in Luxor Egypt; a Secretary to the League of Nations in Geneva; a Superintendent for Devonshire Education Committee and an important member of the Guild of Help in Bradford.

A record of which any headmistress today would be proud!

Saltaire should be very proud of two remarkable women, the first and second headmistress of Salts Girls High School, who steered the education of girls to bring out the best of their characters and abilities.

© Copyright The Saltaire Collection - All Rights Reserved 2023 Website by PMD Creative Solutions Ltd
Back To Top
This site uses cookies: Find out more.