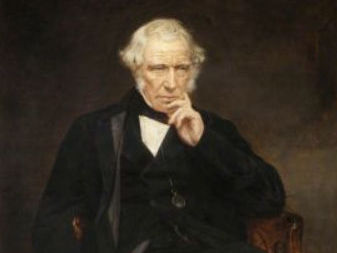 Fairbairn was the greatest mill-builder and experimental engineer of the middle quarters of the C19th. He made a huge contribution to the design and construction of Salts Mill, which is regarded as his mill-building masterwork.

The trajectory of Fairbairn’s life was extraordinary. From humble Scottish beginnings and a millwright apprenticeship at a Newcastle colliery, he become a Fellow and Gold Medallist of the Royal Society, President of the Institution of Mechanical Engineers, and the 1st Baronet of Ardwick.

As well as being a major figure in the construction of iron ships, railway engines (he built over 500), and bridges (he built 1,000), Fairbairn advanced the science of material strengths and properties.

At Salts Mill, he was responsible for its iron structure, the lay-out of the machinery, the design and manufacture of the boilers, steam engines and line-shafting, and for a tubular-girder bridge over the Aire. Steam was generated by ten multi-tube boilers, driving two independent condensing engines with power transmitted by nearly two miles of line-shafting. Enough wool was spun to serve 1,200 power looms, weaving 5,000 miles of cloth per year. For its 5,000 lights the mill had its own gas works and gasometer. Soft water was collected from the roofs to be used for processes in the mill.

Safety and comfort were not neglected. Always aware of the risks of flaws in castings, Fairbairn tested no fewer than 400 beams. Every known improvement was adopted to secure an agreeable temperature and healthy ventilation.

Was Fairbairn more important than the architects Lockwood and Mawson? Writing about the mill, building professionals and architectural historians Jackson, Lintonbon and Staples say that “the role of the engineer… was probably greater than is usually credited, for the ‘architecture’ of the mill was little more than a wrap-around skin of Italianate stonework”.

Writing three years after its completion, John James recognised the mill as “supremely at the head of those in the worsted department”. He drew attention to the emphasis on the health and comfort of the workpeople. In the weaving shed, with over a thousand looms, all the shafting was located under the floor to prevent accidents and free it from ‘the giddy whirl of the shafting and gearing’.

Fairbairn made the most of this high-profile commission. At the opening ceremony, in his reply to Salt’s toast to architect and engineer, he referred to the lengths of the shafting and per annum output of cloth as almost reaching the native mountains of the alpaca. Soon after, he published his plans for the mill in a book that ran to four editions and was translated into French and Spanish.

Fairbairn was justly proud of Salts, his largest work of mill construction. By the end of his life, his work was to be found not only in Britain but in Brazil, Sweden, Russia, France, Turkey and Australia – and the influence of this engineering titan was global.

Image of Fairbairn courtesy of the Science Photo Library.

Text owes much to Richard Byrom’s PhD thesis on Fairbairn