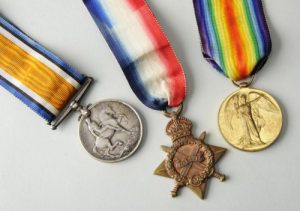 In 2017, the Saltaire Collection received a donation of World War 1 medals belonging to LCp Thomas Hodson, that were found in the cellar of a house in Saltaire. Through local news items and the help of a local historian we were able to trace his relatives who were than reunited with these medals. The family generously decided to leave these in the collection.

LCp Thomas Hodson was born in Shipley and was a warehouseman at The Conditioning House in Bradford prior to enlistment. Hodson’s Division landed in Le Harve, France in August 1915. They served in front line trenches and several battles, including the Battle of the Somme where Hodson was killed in action on the 29th July 1916.  He is remembered at the Thiepval Memorial in the Somme and on the Rolls of Honour at Nabs Wood cemetery, St Paul’s, and St Peter’s in Shipley.

LCp T. Hodson was born in 1892; son of Tom and Rosa Hodson. His service number was 13083. His medals and memorabilia from World War 1 are The ‘Pip, Squeak and Wilfred’ medals (the popular names for The 1914 Star or 1914-15 Star, British War Medal and Victory Medal respectively) and a ‘Dead Man’s Penny’ which was issued to next of kin of all British and Empire service personnel killed as a result of the war. In addition, a Princess Mary Gift Fund 1914 box was a present for all those serving during Christmas 1914, the box contents included cigarettes and/or chocolate, a photo of Princess Mary and a signed card. These are in the Saltaire Collection.  www.saltairecollection.org 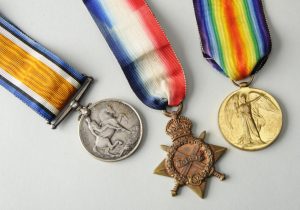 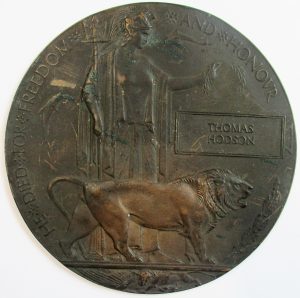 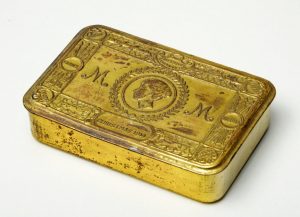 Out and about with the Alpacas

The Saltaire Collection team were really looking forward to a…

The role of the ‘overlooker’ in Salts Mill

Have you ever wanted to know more about the individuals…

Brought to you by creative educator Rachel Wood, author and…

Enter your email address and we'll add you to our mailing list. You can unsubcribe at any time.
Follow Us
Follow us on social media to stay on track with the latest news.
© Copyright The Saltaire Collection - All Rights Reserved 2020 Website by PMD Creative Solutions Ltd
Back To Top
×
This site uses cookies: Find out more.